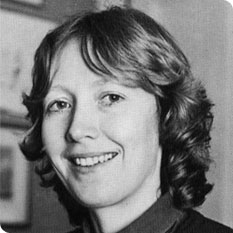 Caroline Walker was a fearless and effective campaigner who believed passionately in improving public health through good food.

Caroline was born in Hampshire in 1950 and educated at Cheltenham Ladies College. In 1972 she completed a degree in biology at Queen Elizabeth College, and shortly afterwards began a postgraduate course in Human Nutrition. Between 1980 and 1984 Caroline’s work included:

During the following years, the expanded version of “The Food Scandal” was published and Caroline became chief advisor to the BBC (Food and Health Campaign), and advisor to Granada and Thames TV for over 30 nationally networked programmes. In response to a request from a staggering half a million people, Caroline wrote or co-wrote six booklets to accompany the TV series. This was a very productive time for Caroline during which she lectured up and down the country and gave advice to many people, both professionals and concerned consumers. In addition to being named Woman of the Year, Caroline co-founded the Food Additives Campaign and shared the Periodical Publisher’s Association prize for Campaign of the Year. She was advisor to the following:

Caroline was diagnosed with colon cancer after emergency treatment in January 1985, and despite two further operations to relieve a bowel obstruction, she died on September 22nd 1988. Throughout her illness Caroline continued to work and campaign, recording an interview for the Radio 4 Food Programme on August 31st 1988. Publicly, Caroline is remembered as a fearless and effective campaigner who believed passionately in improving public health through good food. Those who knew will remember her humour, her love of nature, her care for children, and her work as a scientist and tireless campaigner. As Dr Hugh Sinclair (Director, International Institute of Human Nutrition) wrote of her:

“We cannot replace her contribution to nutrition. Her knowledge, her intellectual honesty, her brilliance as a communicator, her fearlessness, made her outstanding… So many of us will treasure the privilege of having known her and admire her immensely brave struggle against adversity.”

Find out who is involved in the Trust…

This website uses cookies to improve your experience while you navigate through the website. Out of these, the cookies that are categorized as necessary are stored on your browser as they are essential for the working of basic functionalities of the website. We also use third-party cookies that help us analyze and understand how you use this website. These cookies will be stored in your browser only with your consent. You also have the option to opt-out of these cookies. But opting out of some of these cookies may affect your browsing experience.
Necessary Always Enabled

Any cookies that may not be particularly necessary for the website to function and is used specifically to collect user personal data via analytics, ads, other embedded contents are termed as non-necessary cookies. It is mandatory to procure user consent prior to running these cookies on your website.